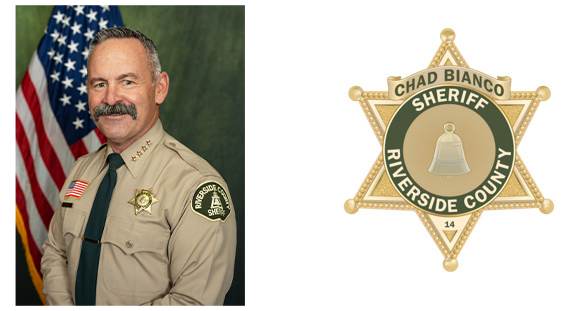 Chad Bianco was elected Sheriff, Coroner, and Public Administrator of Riverside County in the November 6, 2018, general election, and in June 2022 he was re-elected to his second term. He is a twenty-nine-year veteran of the Sheriff's Office. As Sheriff, he serves as the Chief Law Enforcement Officer of Riverside County.

Sheriff Bianco began his career with the Riverside County Sheriff’s Office on December 31,His first assignment was in Corrections at the Robert Presley Detention Center. He then worked patrol and narcotics in the City of Lake Elsinore. Sheriff Bianco held supervisory and management positions at the Jurupa Valley Station, Moreno Valley Station, Larry D. Smith Correctional Facility, and Hemet Station. Additionally, he served administrative assignments in Internal Affairs, and Corrections Administration and Planning. As the fourteenth Sheriff of Riverside County, Sheriff Bianco also serves as Coroner and Public Administrator.

Sheriff Bianco is married with four adult children, and two grandchildren. He and his wife, Denise, live in the Woodcrest area of Riverside. Sheriff Bianco believes in service above self, and hopes that his priorities of God, family, and service will provide meaningful guidance and direction as the Sheriff’s Office engages in an unprecedented change of culture to positively influence and engage our community.