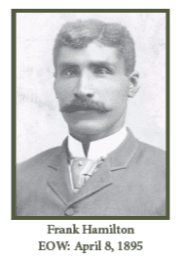 "Special Deputies" were used regionally to supplement the Sheriff’s Office and provide law enforcement in the outlying areas of the county.

In 1895, two years after Riverside County was formed, the area was still the "wild west" with men wearing gun belts and pistols, people traveling on horseback, and everything else associated with the old "cowboy days."

Also in 1895, a Native American man from the Cahuilla area, later to be known as Anza, was working as a Riverside County Special Deputy Sheriff in the region. This man, Frank Hamilton, acted as a law enforcement officer for the Riverside County Sheriff’s Office in the areas surrounding the Cahuilla (Anza) area, including the area of San Jacinto.

In the evening hours on April 8, 1895, Frank Hamilton was in the town of San Jacinto tending to his business and duties as a Special Deputy Sheriff would in the old west. He was in the town saloon when a disagreement erupted between him and Charles Marshall. Marshall became enraged over the disagreement. Hamilton, who was armed with his pistol at the time, told Marshall to go away and that he did not want any trouble with him. The two then parted ways.

Hamilton continued about his duties and went to another San Jacinto business. Marshall, still enraged from being disrespected by Special Deputy Hamilton, a Native American, began roaming the town of San Jacinto in search of a pistol to borrow.

Ultimately, Hamilton ended up in an alley adjacent to the town saloon talking to Albert Larson about the earlier argument he had with Charles Marshall. During Hamilton’s conversation with Larson. Marshall suddenly emerged in the alley armed with a revolver he had borrowed. Marshall immediately began firing his pistol at Hamilton without warning. Marshall’s gunfire initially struck Larson and subsequently struck Hamilton. Hamilton, despite being severely wounded, was able to draw his revolver and return fire and wound Marshall.