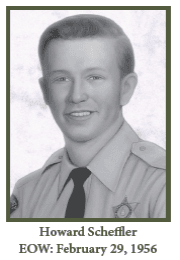 Deputy Howard Scheffler was employed with the Riverside County Sheriff’s Department one year. He was hired on February 1, 1955, and assigned to the Indio Station.

Deputy Scheffler was driving home from a day off in Riverside. He had worked patrol the night before. His vehicle veered off the dividing strip and rolled, killing Deputy Scheffler instantly.

Deputy Scheffler was survived by his wife and twin daughters.