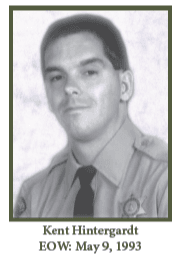 Deputy Kent Hintergardt was employed with the Riverside County Sheriff’s Department for two years. He was hired as a lateral Deputy Sheriff, coming from Los Angeles Sheriff’s Department on February 7, 1991, and assigned to Lake Elsinore Station. He was transferred to Southwest Station on July 11, 1991.

While working patrol at the Southwest Station, he was called to a disturbance call between a boyfriend and girlfriend. Unknown to Deputy Hintergardt, the girlfriend had already been killed inside the apartment.

Deputy Hintergardt was survived by his wife and daughter. He and his wife were expecting their second child at the time of his death.