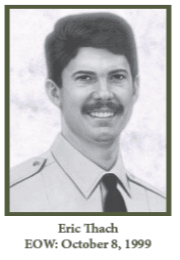 During the early afternoon hours on Friday, October 8, 1999, Deputy Eric Thach was dispatched to a report of an open door at a residence in Pedley.

Deputy Thach walked in on a home invasion robbery. At this point, Deputy Thach broadcast an 11-99 (officer needs immediate assistance).

Deputy Thach was apparently checking alongside the residence when he was shot through a window from inside the residence. Following the shooting, the suspect fled the residence, and ran into the Santa Ana riverbed. Units responding to the 11-99 were on scene within one minute of the broadcast.

Units responding to the scene pulled Deputy Thach from the area of the residence and administered first aid. It appeared Deputy Thach had been shot with a large caliber weapon. Deputy Thach was transported to the hospital where he was pronounced dead.

The suspect was subsequently shot and fatally wounded during the search of the riverbed.