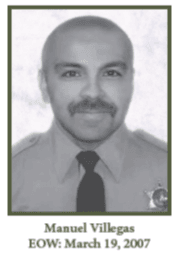 During the early morning hours of Monday, March 19th, 2007, Deputy Manuel ’Manny’ Villegas was working the unincorporated, agricultural communities of Thermal and Mecca, in the area of Pierce Street and Avenue 63.

He was en route to back-up a fellow deputy when another driver traveling in the opposite direction veered into Manny’s path and both drivers were killed.

Though he was only 33 years old at the time of his death, Manny had lived the life many men strive for, but fall short of. He was a husband, a father, a decorated combat veteran, a friend and valued beat partner.

Manny served his country in both the United States Marine Corps as an infantryman with the First Marine Division and later as a member of the U.S. Army’s elite Special Forces. It was as a Green Beret where Manny served in Kuwait, Iraq and Afghanistan during the War on Terror and his exploits on the battlefield earned him the Bronze Star with Combat ’V’.

Manny brought his quiet leadership, keen sense of humor and esprit de corps to the Riverside County Sheriff’s Department in November of 2005. He attended the Sheriff’s Basic Academy where he graduated first in his class, was awarded the California Academy Directors Association Award for being the most inspirational student to his classmates and instructors. Along the way he set the Academy record for the mile and a half run, with a scorching time of 8:01.

Manny reported to the Indio Sheriff’s Station in May 2006 and this quiet, unassuming man quickly became a favorite among his peers, his supervisors and the public he served. It wasn’t until Manny’s death that his co-workers learned of his battlefield commendations and his certification as one of the Army’s elite parachutists.

Deputy Manuel Villegas was buried with full military honors in Bakersfield, California. He is survived by his wife Xochitl and his four children, daughter Stacie Lee and sons Ezequiel, Israel and Xavier.