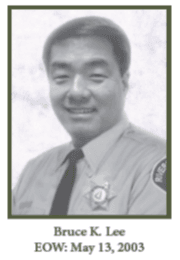 The end of watch came on May 13, 2003 for Deputy Bruce K. Lee. Lee responded to a disturbing the peace call in La Quinta. Immediately upon arrival, Lee was confronted by a mentally disturbed twenty-four-year-old Kevin Diablo, who was known to have had prior difficulties with the law.

In attempting to question and reason with Diablo, a physical encounter ensued, and Diablo was able to secure Lee’s police baton. He inflicted severe blows to the deputy’s head and neck, resulting in massive trauma.

A back-up deputy, responding to Lee’s call for assistance, arrived at the scene and observed Lee’s motionless body lying on the ground. Still brandishing the police baton, Diablo immediately confronted the back-up deputy. When Diablo ignored the command to drop the baton, and continued to advance toward the deputy in a threatening manner, the deputy fired his service weapon, mortally wounding Diablo.

Lee’s attraction to law enforcement was sparked in 1968, when as an 11-year-old, he watched an Inglewood police officer arrest a man for stealing a car and attempting to steal gasoline from Lee’s father’s service station. Years later, Lee was partnered with that same Inglewood policeman’s son, Michael Manning. A 22-year veteran of Riverside County Sheriff’s Department, Lee was assigned to Indio Station. His wife of nine years, mother, father and sister survived him.

In December 2005, a stretch of Highway 111 through La Quinta was named the "Deputy Bruce Lee Memorial Highway."