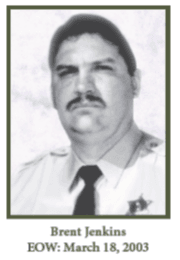 Deputy Brent C. Jenkins, 45, became the fifth member of the Riverside County Sheriff’s Department, assigned to the San Gorgonio Pass, and the third from the Cabazon Station to die in the line of duty since 1997.

On Tuesday, March 18, Jenkins became the latest fatality when the 1999 Chevrolet Tahoe SUV he was driving drifted off Interstate 10 in Beaumont and slammed into a tree about 4:30 a.m.

According to witnesses, Jenkins was driving about 70 mph when his vehicle drifted over one eastbound lane, without braking, and then

left the road. He was wearing his seat belt and shoulder harness, authorities said.

A native of Utah, Jenkins attended four years of seminary in the Church of Jesus Christ of Latter-day Saints. He joined the Sheriff’s Department in 1990 and worked in the Pass area for the last five years. His wife, and six children survive him.